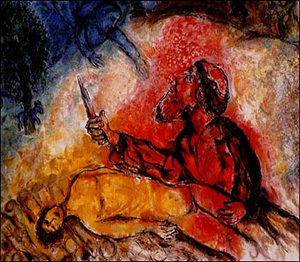 In the previous Parashah we have seen Yosef announcing to his brothers: “Ani Yosef” - “I am Yosef,” and his brother's reaction to this announcement. The Talmudic scholars compare this scene with the coming of Moshiach when He will announce to the Jewish people, “I am the LORD” and then, just as Yosef's brothers, the Jewish people will understand God's master plan. It will be a joyous event, even though at first, again just as Yosef's brothers, the Jewish people will be distraught for rejecting Him, as was prophesied by Z'kharyah 12:10-12: “'And I will pour upon the house of David, and upon the inhabitants of Yerushalayim, the spirit of grace and of supplication and they shall look towards Me, whom they have pierced.' And they shall mourn for Him, as one mourns for an only son. On that day there shall be a great mourning in Yerushalayim, like the mourning of Hadad-Rimmon in the valley of Megiddo. And the land shall mourn, every family by itself; the family of the house of David by itself, and their wives by themselves.”

The rabbis understood from this and other passages of the Tanakh that Moshiach had to die and also to reign as king. But, because they could not conceive that this could be happening to the same Moshiach, they concluded that there must be two Moshiachs to come, first, Moshiach ben Yosef, who will die, and second, Moshiach ben David, who will reign as King. For this is what we read in Talmud - Mas. Sukkah 52a: "'And the land shall mourn, every family apart; the family of the house of David apart, and their wives apart' [as prophesied by Z'kharyah 12:12 above]... What is the cause of the mourning [mentioned in the last cited verse]? — Rabbi Dosa and the Rabbis differ on the point. One explained, The cause is the slaying of Messiah the son of Joseph, and the other explained, The cause is the slaying of the Evil Inclination. It is well according to him who explains that the cause is the slaying of Messiah the son of Joseph, since that well agrees with the Scriptural verse, 'And they shall look upon me because they have thrust him through, and they shall mourn for him as one mourned for his only son.'"

What the rabbis of old did not foresee was that there will not be two Moshiachs, but that the same Moshiach will come twice. First, as prophesied by Daniel, to come before the destruction of the Second Temple in Yerushalayim in 70CE as the suffering servant, and second, to come at the end of time as the reigning King and to establish the Messianic Kingdom. Daniel 9:24-26: "Seventy weeks [of years] are decreed upon your people and upon your holy city, to finish the transgression, and to put an end to sin, and to atone for iniquity, and to bring in everlasting righteousness, and to seal up the vision and prophecy, and to anoint the Most Holy [i.e. Moshiach]. Know therefore and understand, that from the going forth of the command to restore and to build Yerushalayim until the coming of an Anointed Prince [i.e. Moshiach] shall be seven weeks [i.e. 49 years], then sixty two weeks [i.e. 434 years]. It shall be built again, with squares and moat, but in a troubled time. And after sixty two weeks shall an Anointed One [i.e. Moshiach] be cut off [i.e. die], and have nothing [i.e. resurrected]; and the people [i.e. the Romans] of a prince [i.e. Titus] who shall come shall destroy the city and the sanctuary; and its end shall be with a flood, and to the end of the war desolations are decreed."

Indeed, Moshiach came before 70 CE, He was anointed by Yochanan (Mattityahu 3:13-17), He atoned for iniquity by His sacrifice on the Roman execution stake, and He sealed the prophecy. He was cut off (died) but had nothing (was resurrected). This extraordinary event was recorded by the rabbis in the Talmud: "It was taught: On the eve of the Passover Yeshu the Nazarean was hanged." Talmud - Mas. Sanhedrin 43:a, and "Our Rabbis taught: During the last forty years before the destruction of the Temple the lot [for the LORD] did not come up in the right hand; nor did the crimson-coloured strap become white; nor did the western most light shine." Talmud - Mas. Yoma 39b. The rabbis would tie a crimson-colored strap to the Yom Kippur sacrifice and this strap would turn white signifying that God accepted the atoning sacrifice. With the sacrifice of Moshiach Yeshua around 30 C.E. on the eve of Passover - forty years before the destruction of the Temple, God received and accepted the ultimate atoning sacrifice and, from that moment on, there will be no need for any other sacrifice to atone for sin, thus, no need for a Yom Kippur strap to turn white. Yeshua paid the ultimate price to free us from the bondage of sin.

Even to this day there is still a veil of unbelief, but the Scriptures are clear; Moshiach had come and will come again and reign as King. When the Jewish people's hearts will yearn for their true Moshiach, God will show them grace and the veil will be lifted up from their eyes and they will comprehend everything that transpired throughout history. Then they will understand that the One which they despised was working all along behind the scenes for their survival (just as Yosef did), calling them to repentance in spite of their rejection and they will mourn for the time they have wasted away from their Savior. Just as some of us were rejecting Him over and over, but then, when we finally realized who He was and received Him as our Savior, we had mourned for the time wasted in the world of sin.

Now, in this week's Parashah God is revealing the thread of history of His redemptive plan by revealing Moshiach's lineage in the blessing that Ya'akov gives to Yehudah. “And Ya‘akov called to his sons, and said, Gather yourselves together, that I may tell you that which shall call to you in the last days. Gather yourselves together, and hear, you sons of Ya‘akov; and listen to Israel your father... Yehudah, you are he whom your brothers shall praise; your hand shall be in the neck of your enemies; your father’s children shall bow down in your presence. The staff shall not depart from Yehudah, nor the scepter from between his feet, until Shiloh comes; and to him shall the obedience of the people be” Bereishit 49:1-2, 8-10.

Yehudah was the fourth son of Leah, the son for which she gave praises to God, and the one who saved Yosef from being killed by his brothers but sold him to the Ishmaelites. After this incident we are not told about what transpired between him and his brothers, but Yehudah departs from his brothers and through the union with Tamar the lineage of Davidic dynasty has begun. Through Ya'akov's prophesy we are told that the scepter of the Davidic kingdom and the staff of the prophet shall never depart from the line of Yehudah, but someone will come and unite the two in one person named, or who will bring about, Shiloh, which means "restful" or "peaceful."

The Talmudic rabbis not only concluded that the Messiah will come from the lineage of Yehudah and that His name is Shiloh, but went even further to connect the name of Messiah with the prophesy given by Isaiah in chapter 53: “Rab said: The world was created only on David's account. Samuel said: On Moses account; R. Johanan said: For the sake of the Messiah. What is His [the Messiah's] name? — The School of Rabbi Shila said: His name is Shiloh, for it is written, until Shiloh come. The School of Rabbi Yannai said: His name is Yinnon, for it is written, His name shall endure for ever... The Rabbis said: His name is ‘the leper scholar,’ as it is written, “Surely He hath borne our grieves, and carried our sorrows: yet we did esteem Him a leper, smitten of God, and afflicted” Talmud: Sanhedrin 98b. The rabbis of old understood that Isaiah chapter 53, which, unfortunately, is not read in the synagogues as part of the weekly Haftarah reading, is all about Moshiah, the suffering servant. Today, it would be impossible for anyone to claim to be Messiah based on this Davidic linage, because the tribal records were destroyed with the destruction of the Temple in 70CE.

The Brit Chadashah reveals to us that the rabbis of two millennia ago understood the Messianic prophesies and that they could discern who and from where was the Moshiach supposed to come: “Now after Yeshua was born in Beit-Lehem Yehudah, in the days of Herod the king, chachamim (wise men) from eretz Mizrach (the land of the East) arrived in Yerushalayim, saying, “Where is He that is born Melech haYehudim (King of the Jews)? For we have seen His star, in the Mizrach and have come to fall down before Him.” Because Herod the king heard this, he was terribly shaken, and all Yerushalayim with him. And assembling all the Rashei haKohanim (Chief Priests) and Sofrim (Torah-teachers), he inquired of them the place where HaMoshiach was to be born. They told him, In Beit-Lehem Yehudah; because so it stands written by the Navi (Prophet Micah 5:2): ”And you, Beit-Lehem, in eretz Yehudah are by no means least among the towns or ruling [clans] of Yehudah; because out of you will come a Governor who will be the Roeh Ami Yisroel (Shepherd of My People Israel)" Mattityahu 2:1-6.

But the rabbis were looking not for the suffering servant Moshiah but for the King Moshiah to save them from the Roman occupation and because of that they rejected Yeshua. What they did not understand was that Moshiah was supposed to come first to offer salvation (Luke 4:17-19) to anyone from any nation who will believe in Him, just as Yosef at first was the savior of all other nations who came to Egypt to buy food; and then to come a second time as king, to fulfill God's promise to His people and for all Israel to be saved, just as through Yosef all his family was saved.

We are looking forward to that time, may He speedily come.

The book of Genesis ends with words that will exemplify the life of the Jewish people: “Although you intended me harm, God intended it for good.” Throughout history, many nations intended harm to the Jewish people but God preserved them for the good of humanity. Genesis begins with the creation of the world and ends with the creation of the Jewish nation through the twelve tribes. The death of Yosef is a bridge to the next phase in shaping the Jewish nation as the messengers of God’s desire for mankind, His teachings and His ethics.

Yosef’s body was placed in a coffin, but the Hebrew word is “aron,” an ark, which the sons of Israel will carry for forty years through the wilderness together with the “aron” containing the Torah, both symbols of redemption.

Chazak! Chazak! Venischazeik!
Be Strong! Be Strong! And may we be strengthened!